Sales for Q4 FY 2010 were $525 million, up 29 percent from $408 million in the same quarter last year. Excluding the favorable impact of exchange rate changes, sales increased by 25 percent. Operating income was $28 million, compared to an operating loss of $43 million in the same quarter a year ago. Net income for Q4 was $24 million ($0.14 per share) compared to a net loss one year ago of $35 million ($0.20 per share). Gross margin for Q4 FY 2010 was 35.8 percent, up from 25.0 percent in Q4 FY 2009.
Logitech’s retail sales for the fourth quarter of FY 2010 grew by 27 percent year over year, with sales up by 54 percent in the Americas, 15 percent in EMEA, and 10 percent in Asia. OEM sales grew by 1 percent.
“After a challenging start to the year, we ended Fiscal Year 2010 with very strong sales and gross margin performance,” said Gerald P. Quindlen, Logitech president and chief executive officer. “I’m very pleased that in Q4 we delivered strong sell-through growth and achieved double-digit sales growth in our three retail regions, as well as double-digit sales growth across all of our retail product categories. And we delivered our highest Q4 gross margin ever.
“As we begin FY 2011, our focus shifts from emerging stronger from the downturn to returning to driving strong top-line and profitability growth by executing on our long-term strategy. We enter the new fiscal year with an improving economic outlook, a strong balance sheet and accelerating sales momentum in all retail sales regions. We’re well positioned for growth across our product portfolio. Most notably, we see continued strong double-digit sales growth in the digital home with our line of Harmony remotes, which now includes innovative new models at lower price points for a broader range of households. We also expect accelerating sales growth in FY 11 from our LifeSize video communications division, which in Q4 had its highest billings ever.”
Full-Year Financial Results
For the full fiscal year, sales were $2.0 billion, down from $2.2 billion in FY 2009. Operating income was $78 million, down from $110 million a year ago. Net income was $65 million ($0.36 per share), compared to $107 million ($0.59 per share) in the prior year. Gross margin for FY 2010 was 31.9 percent compared to 31.3 percent in FY 2009.
Outlook
For Fiscal Year 2011, ending March 31, 2011, Logitech targets sales of approximately $2.3 billion and gross margin of approximately 34 percent. The Company expects operating income to approximately double year over year. The tax rate for FY 2011 is expected to be approximately 18 percent.
For the first quarter of Fiscal Year 2011, ending June 30, 2010, Logitech targets sales in the range of $450 million to $465 million and gross margin of approximately 34 percent. The Company expects operating income for Q1 FY 2011 to be approximately $5 million.
Earnings Teleconference and Webcast
Logitech will hold an earnings teleconference on Thursday, April 29, 2010 at 8:30 a.m. Eastern Daylight Time and 14:30 Central European Summer Time. A live webcast of the call, along with presentation slides, will be available on the Logitech corporate Web site at http://ir.logitech.com.
About Logitech
Logitech is a world leader in personal peripherals, driving innovation in PC navigation, Internet communications, digital music, home-entertainment control, gaming and wireless devices. Founded in 1981, Logitech International is a Swiss public company listed on the SIX Swiss Exchange (LOGN) and on the Nasdaq Global Select Market (LOGI).
# # #
This press release contains forward-looking statements, including the statements regarding anticipated sales, operating income and gross margin for Q1 FY 2011, anticipated sales, operating income, gross margin and tax rate for FY 2011, returning to strong top-line and profitability growth, executing on our long-term strategy, being positioned for growth across our product portfolio, the rate of sales momentum in our retail sales regions and for our LifeSize video communications division, and anticipated strong double-digit sales growth in Harmony remotes. The forward-looking statements in this release involve risks and uncertainties that could cause Logitech’s actual results to differ materially from that anticipated in these forward-looking statements. Factors that could cause actual results to differ materially include: our inability to predict the timing and strength of the improvement in our business, operating results and financial condition; the demand of our customers and our consumers for our products and our ability to accurately forecast it; consumer reaction to our new products; the effect of pricing, product, marketing and other initiatives by our competitors, and our reaction to them, on our sales, gross margins and profitability; if we fail to take advantage of long-term trends in the consumer electronics and personal computers industries; if we fail to successfully innovate in our current and emerging product categories and identify new feature or product opportunities; the sales mix among our lower- and higher-margin products and our geographic sales mix; if we fail to execute upon our long-term strategic plans and opportunities; our product introductions and marketing activities not resulting in the product or category growth we expect, or when we expect it; the retention of employees of LifeSize and the ability of Logitech to successfully integrate LifeSize’s market opportunities, technology, personnel and operations and to achieve anticipated results; competition in the video conferencing and communications industry, including from companies with significantly greater resources, sales and marketing organizations, installed base and name recognition; as well as those additional factors set forth in Logitech’s periodic filings with the Securities and Exchange Commission, including our Annual Report on Form 10-K for the fiscal year ended March 31, 2009, and our subsequent Quarterly Reports on Form 10-Q available at www.sec.gov. Logitech does not undertake to update any forward-looking statements.
Logitech, the Logitech logo, and other Logitech marks are registered in Switzerland and other countries. All other trademarks are the property of their respective owners. For more information about Logitech and its products, visit the company’s Web site at www.logitech.com.
(LOGI – IR) 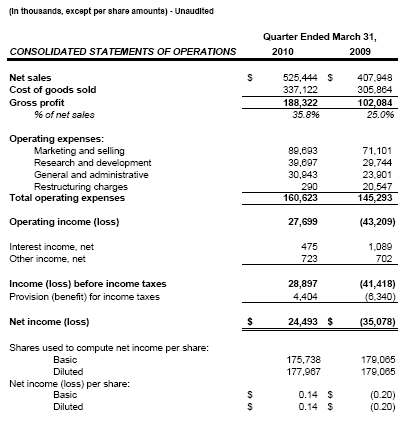 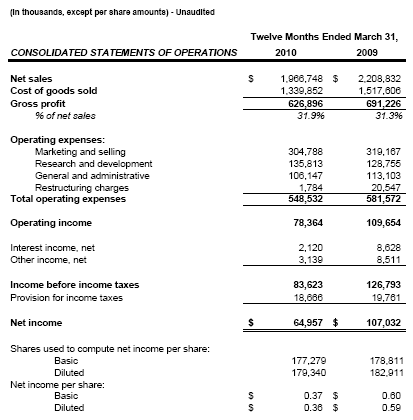 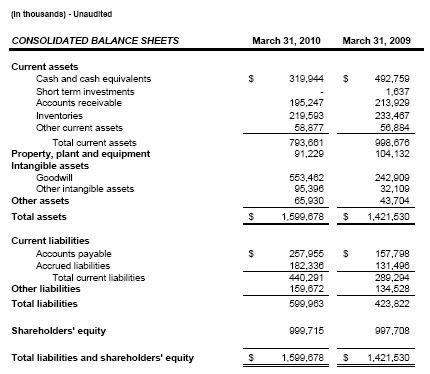 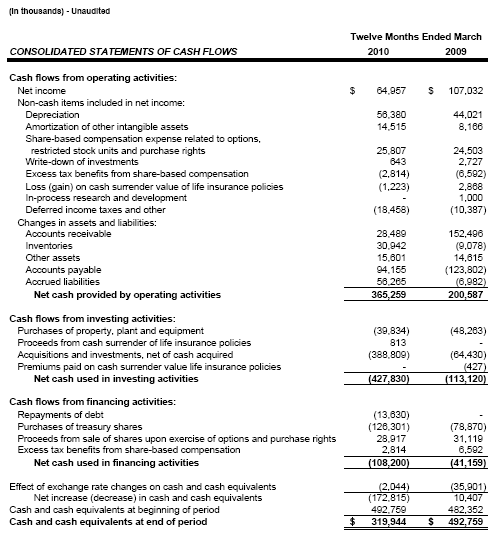 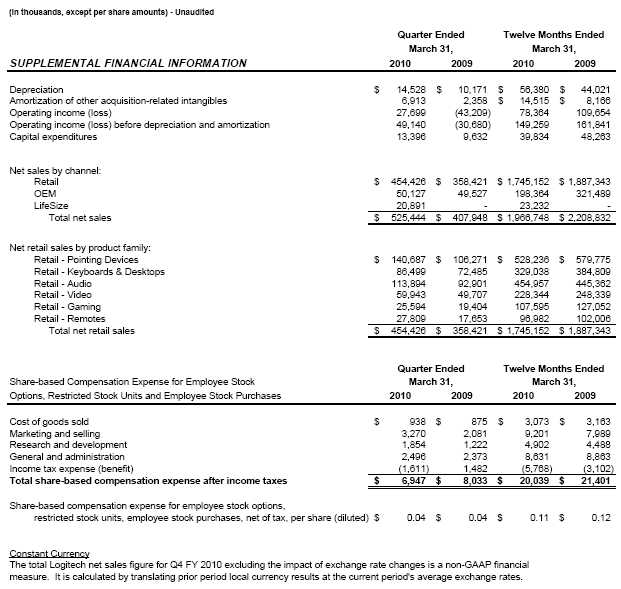