“Fiscal Year 2021 was our best year ever,” said Bracken Darrell, Logitech president and chief executive officer. “It has been rewarding to see Logitech’s products play an essential role enabling work, creation, connection and entertainment as our homes became schools, offices and playgrounds. Our powerful and resilient capabilities allowed us to both deliver remarkable performance in a challenging FY 2021 and, at the same time, invest in compelling plans for the future. The world has just caught a glimpse of what Logitech will become.”

“We delivered excellent financial performance, including record net sales, operating profit, gross margin and cash flow,” said Nate Olmstead, Logitech chief financial officer. “The trends that fueled our growth pre-pandemic - work from anywhere, video everywhere, esports and the democratization of content creation - all accelerated. As our market opportunities have expanded, and we have become a larger, more profitable company, we’re investing in our capabilities to accelerate our innovation, reach new customers and deliver strong financial returns over the long-term.”

Logitech’s board of directors has approved an increased share buyback authorization up to $1 billion. This expands the Company’s current $250 million, three-year share buyback authorization. To date, the Company has repurchased $165 million of shares in the current program. Following approval from the Swiss Takeover Board, the increase will give a total authorization of $835 million for repurchases over the remaining 27 months of the program through July 2023.

Logitech’s board of directors has also approved a proposal for a Fiscal Year 2021 dividend, which would be approximately a 10 percent annual increase versus last year’s dividend. Together with the new share buyback authorization, this demonstrates the Company’s continued commitment to consistently return cash to shareholders.

Logitech has made its prepared written remarks for the financial results videoconference available online on the Logitech corporate website at http://ir.logitech.com.

Logitech will hold a financial results videoconference to discuss the results for Q4 and the full Fiscal Year 2021 on Thursday, April 29, 2021 at 8:30 a.m. Eastern Daylight Time and 2:30 p.m. Central European Summer Time. A livestream of the event will be available on the Logitech corporate website at http://ir.logitech.com.

To facilitate comparisons to Logitech’s historical results, Logitech has included non-GAAP adjusted measures, which exclude share-based compensation expense, amortization of intangible assets, acquisition-related costs, change in fair value of contingent consideration for business acquisition, restructuring charges (credits), loss (gain) on investments, non-GAAP income tax adjustment, and other items detailed under “Supplemental Financial Information” after the tables below. Logitech also presents percentage sales growth in constant currency to show performance unaffected by fluctuations in currency exchange rates. Percentage sales growth in constant currency is calculated by translating prior period sales in each local currency at the current period’s average exchange rate for that currency and comparing that to current period sales. Logitech believes this information, used together with the GAAP financial information, will help investors to evaluate its current period performance and trends in its business. With respect to the Company’s outlook for non-GAAP operating income, most of these excluded amounts pertain to events that have not yet occurred and are not currently possible to estimate with a reasonable degree of accuracy. Therefore, no reconciliation to the GAAP amounts has been provided for Fiscal Year 2022.

Logitech designs products that have an everyday place in people's lives, connecting them to the digital experiences they care about. Almost 40 years ago, Logitech started connecting people through computers, and now it’s a multi-brand company designing products that bring people together through music, gaming, video, and computing. Brands of Logitech include Logitech, Logitech G, ASTRO Gaming, Streamlabs, Blue Microphones, Ultimate Ears and Jaybird. Founded in 1981, and headquartered in Lausanne, Switzerland, Logitech International is a Swiss public company listed on the SIX Swiss Exchange (LOGN) and on the Nasdaq Global Select Market (LOGI). Find Logitech at www.logitech.com, the company blog or @Logitech.

This press release contains forward-looking statements within the meaning of the federal securities laws, including, without limitation, statements regarding: our preliminary financial results for the three months and full fiscal year ended March 31, 2021, long-term growth trends, Logitech’s potential, investing in our capabilities to accelerate our innovation, reach new customers and deliver strong financial returns over the long-term, our share repurchase program, share repurchases, our Fiscal Year 2021 dividend proposal, and outlook for Fiscal Year 2022 operating income and sales growth. The forward-looking statements in this press release involve risks and uncertainties that could cause Logitech’s actual results and events to differ materially from those anticipated in these forward-looking statements, including, without limitation: if our product offerings, marketing activities and investment prioritization decisions do not result in the sales, profitability or profitability growth we expect, or when we expect it; if we fail to innovate and develop new products in a timely and cost-effective manner for our new and existing product categories; if we do not successfully execute on our growth opportunities or our growth opportunities are more limited than we expect; the effect of demand variability and supply shortages; the effect of pricing, product, marketing and other initiatives by our competitors, and our reaction to them, on our sales, gross margins and profitability; if we are not able to maintain and enhance our brands; if our products and marketing strategies fail to separate our products from competitors’ products; the COVID-19 pandemic and its potential impact; if we do not efficiently manage our spending; if there is a deterioration of business and economic conditions in one or more of our sales regions or product categories, or significant fluctuations in exchange rates; changes in trade policies and agreements and the imposition of tariffs that affect our products or operations and our ability to mitigate; risks associated with acquisitions; and the effect of changes to our effective income tax rates. A detailed discussion of these and other risks and uncertainties that could cause actual results and events to differ materially from such forward-looking statements is included in Logitech’s periodic filings with the Securities and Exchange Commission (SEC), including our Annual Report on Form 10-K for the fiscal year ended March 31, 2020, our Quarterly Report on Form 10-Q for the fiscal quarter ended December 31, 2020 and our subsequent reports filed with the SEC, available at www.sec.gov, under the caption Risk Factors and elsewhere. Logitech does not undertake any obligation to update any forward-looking statements to reflect new information or events or circumstances occurring after the date of this press release.

Logitech and other Logitech marks are trademarks or registered trademarks of Logitech Europe S.A. and/or its affiliates in the U.S. and other countries. All other trademarks are the property of their respective owners. For more information about Logitech and its products, visit the company’s website at www.logitech.com. 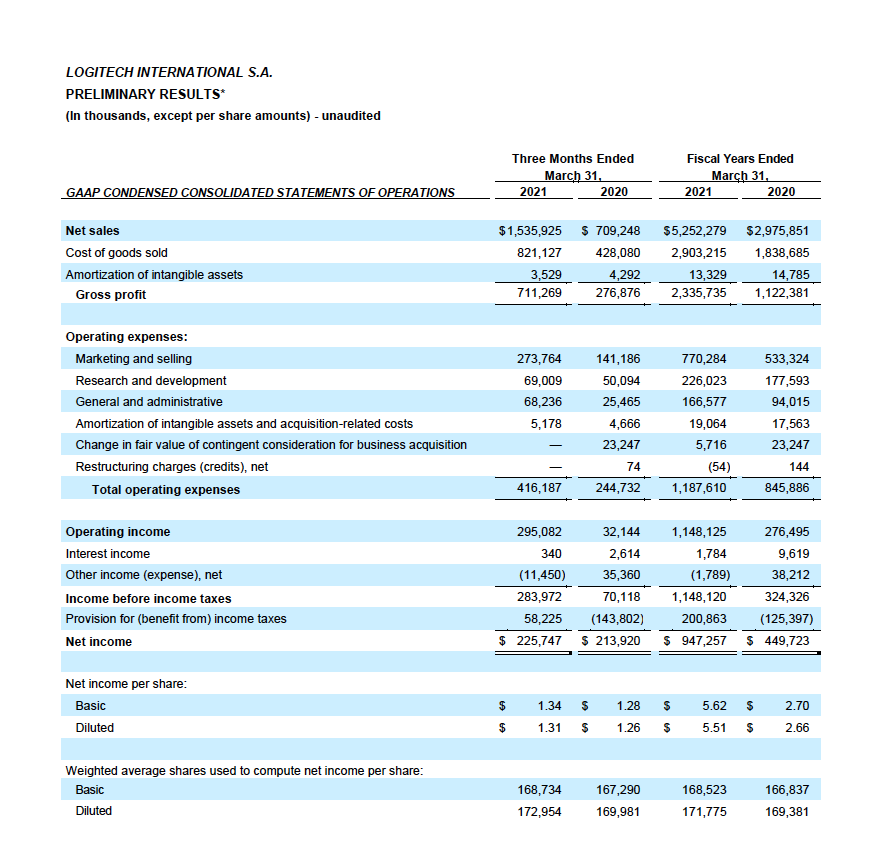 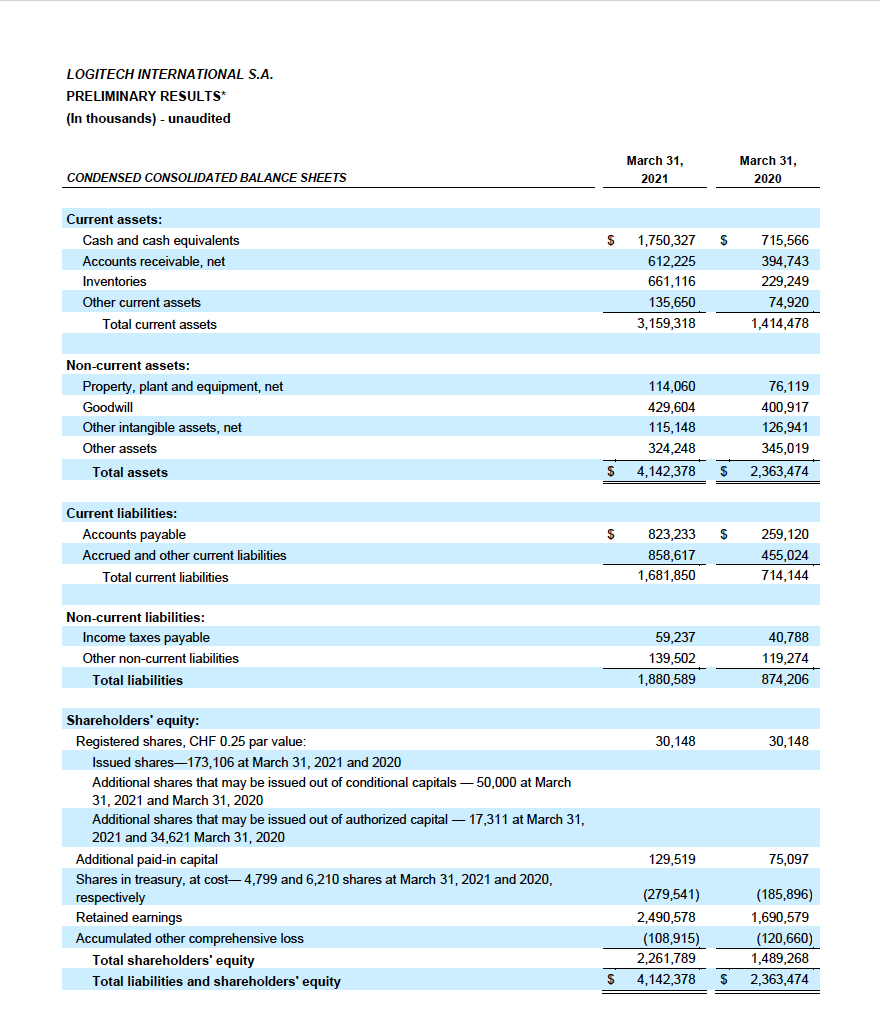 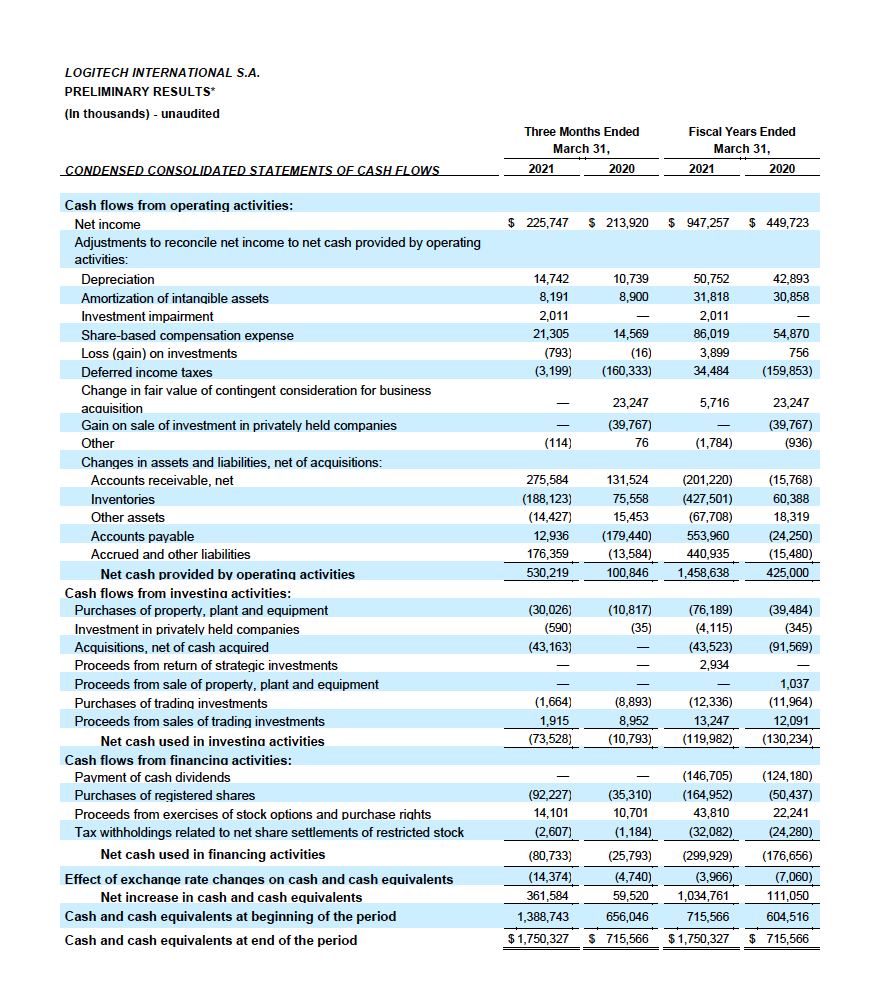 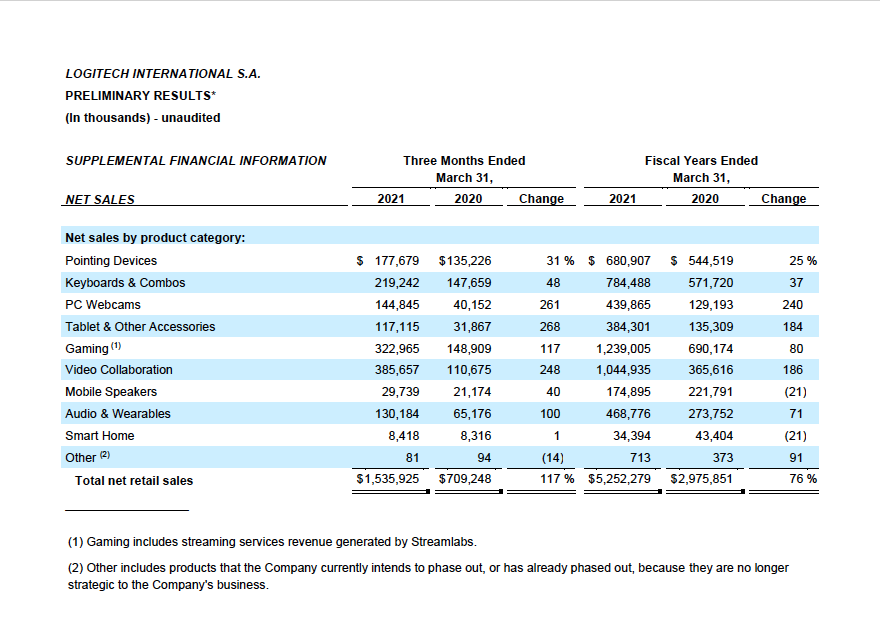 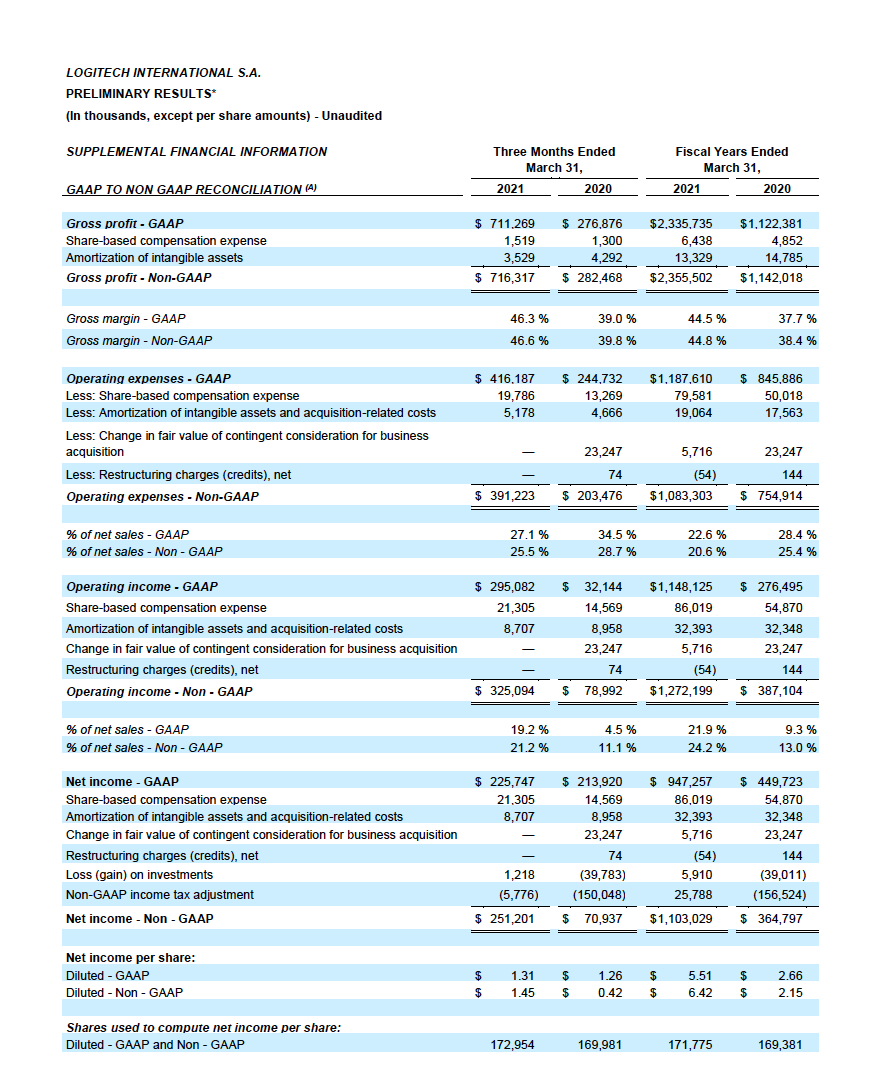 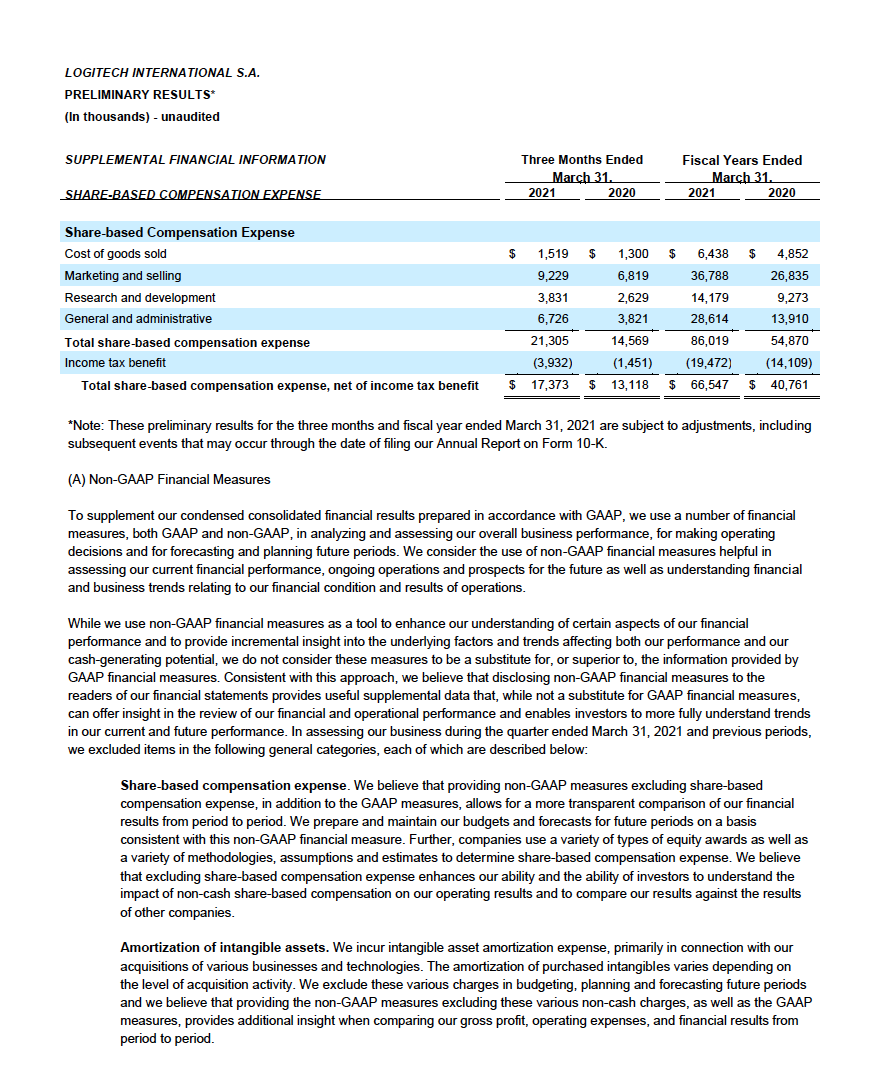